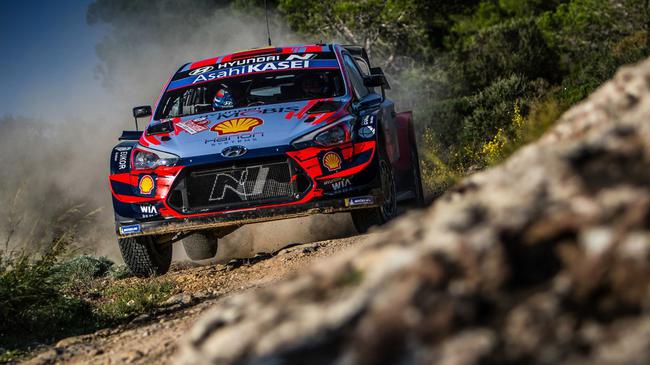 From October 9th to 11th local time in Italy, the sixth round of the 2020 World Rally Championship (WRC) was held in Sardegna, Italy. After three days of fierce competition, the Spanish veteran Sordo of Hyundai Motorsport won the championship, the Belgian driver Neuville of Hyundai Motors was 5.1 seconds behind Sordo and finished second in the game. The French driver Ogier of Toyota Motorsport was behind Novo Iver won third place in 1 second.

The Italian Rally was first held in Sanremo in 1928. It joined the WRC calendar in 1973 and came to Olbia in the northern part of Sardinia in 2004. In 2014, the race pits were from Olbia in the northern part of Sardinia. (Olbia) moved to Alghero, a city in western Sardinia. The mountain tracks in Sardinia are many curves and narrow. Both sides of the track are densely covered with bushes and stones. There are often some big rocks hidden in the grass on the roadside. Careless attention may damage the tires or suspension of the car.

Due to the impact of the epidemic, the WRC’s 14 games this year have been reduced to seven games. However, there was good news on October 9 that the WRC’s calendar this year will be adjusted to eight games. Monza, Italy will be held in December. The final closing game will be held from the 4th to the 6th.

In the last race in Turkey, Ogier, Neuville and Tanak all suffered different accidents. Neuville was only second in the game due to a puncture in the lead. The engine water temperature was too high and had to retire on the last day, and in the end a point was not scored. The British driver Evans was unscathed and eventually won the championship, and the driver points also led the standings. With only three games left, any mistake may ruin all efforts, and every game is very important.

The surface of the track in Sardinia, Italy is very thick and narrow with many bends. Evans, who took the lead in the start, took on the heavy task of "sweeping the road" and its speed was greatly affected. Ogier, who started behind him, was very cautious today and was not fast. The drivers behind the grid were all beneficiaries. The speed was much faster. The Finnish teenager Suninen of the M-Sport team took the lead and won the first stage (SS1), 12 seconds faster than the other drivers. Much. His teammate Lapi also performed well, occupying the second place in the game.

In the SS2 stage, the Spanish veteran Sordo, who represented the Hyundai team, performed very well. He won the stage and his total score rose to second place in the game. The Lapis of the M-Sport team, which was previously ranked second, had to withdraw from Friday's race due to an engine failure due to excessive water temperature.

In the SS3 and SS4 stages, Sordo continued to chase after and won the SS4 stage. After the SS4 stage, the total score surpassed Suninen in front of him and took the first place in the game.

While Sordo was advancing so hard, his teammate Tanak suffered a dark morning. The Estonian encountered suspension problems in the first stage, and the stage time was much slower than his opponent. Four games in the morning After the end of the period, the total score has fallen to the ninth position in the audience.

In the two stages in the afternoon, Sordo continued his outstanding performance in the morning, won two stages and finally ended Friday's game with the first result in the game. Although Sunining did not have the surprise of the first stage of the morning in the subsequent games, he played stable throughout the day and temporarily ranked second in the game, 17.4 seconds behind Sordo.

The Belgian driver Neuville of Hyundai Motors did not find a very suitable rhythm during the morning race due to vehicle tuning. He also encountered two stalls in the midway. However, he improved in the afternoon race and ranked third in the game. The result ended Friday's game, 17.8 seconds behind Sunining.

Toyota’s Ogier was very cautious throughout the day and never tried his best. He finally finished Friday’s game with a fourth place finish, but only 0.8 seconds behind Neuville. Evans, who leads the championship of sports cars, temporarily ranks fifth in the game, 15.9 seconds behind Ogier.

Hyundai's Tanak's car was resurrected after noon maintenance. After two stages of chasing in the afternoon, he ended Friday's race with an eighth result.

Toyota team youngster Rovan Pera overturned in the test stage on Thursday, but the car did not suffer any major damage. He played normally in the four stages in the morning and ranked sixth in the game. However, he made a mistake in the afternoon's SS5 stage and lost a lot of time, ending Friday's game with a ninth place in the game.

As soon as the game started on Saturday, Ogier began to exert his strength and won the first stage of the morning (SS7). The total score surpassed Neuville in front and occupied third place in the audience. Sunining, who was second in the game yesterday, was unable to use the handbrake due to a malfunction of the car's differential. He had to reverse the car at a few low-speed turnbacks and lost a lot of time. Finally, after the SS8 stage, he was overtaken by Ogier and Neuville behind him and fell to fourth place in the game.

The battle between Ogier and Neuville was the focus of the audience today. Ogier changed his cautious attitude on Friday and used all his strength to fight. Neuville is also unrelenting, you come and I will not give way to each other. After being overtaken by Ogier in the first stage of the morning, Neuville clenched Ogier tightly. The gap between the two was always within 3 seconds. Finally, in SS10, Neuville surpassed the front by a stage victory. Ogier, occupy the second place in the audience.

In the two stages of the afternoon, Ogier continued to attack, won two stages of victory, and finally succeeded in surpassing Neuville in the last stage of the day, ending Saturday's game with the second place in the game. game. Neuville was 1.5 seconds behind Ogier and temporarily ranked third in the game.

Leading Spanish veteran Sordo did not slow down today. After Suninen was gradually thrown away behind him, he did not relax his vigilance against Ogier and Neuville, but went all out and won all day. A stage victory ended Saturday's game with a 27.4 second lead.

Toyota’s British driver Evans seemed to hesitate a bit today. He was too cautious in the morning race and was opened up by Ogier and Neuville. In the afternoon game, he was too aggressive, tire consumption was serious, which affected the speed, and finally ended Saturday's game with fourth place in the game, nearly 30 seconds behind Neuville.

The Finnish teenager Suninen of the M-Sport team fell to fifth in the game due to a differential failure in the morning race. However, after midday maintenance, he did not lose much time and was temporarily in the audience. fifth. Tanak, who ranked eighth in the game yesterday, rose to sixth in the game after a day of hard work and other drivers' mistakes.

Toyota's Rovan Pera made a mistake in the second stage (SS8) in the morning. The car hit a tree on the side of the road and directly knocked off the left rear wheel and withdrew from today's race. The British driver Green Smith of the M-Sport team, ranked sixth in the game, had to retire before the SS10 stage due to a broken generator belt.

There are only four stages in the Sunday game, and the stage distance is 41.9 kilometers. Sordo led the lead with 27.4 seconds. As long as there is no major accident, the Spanish veteran will surely win the championship. When there is no suspense about the ownership of the championship, the focus of the audience is on the second place.

After the fierce competition in the first two days, Ogier was only 1.5 seconds ahead of Neuville, occupying the second place in the game. At the beginning of the game on Sunday, both of them went all out. In the first stage of the morning (SS13), Ogier won the stage, but only 0.2 seconds faster than Neuville. The gap is only 1.7 seconds.

In the subsequent SS14 stage, Neuville defeated Ogier and won the stage victory, narrowing the gap between the two by 0.1 seconds. In the SS15 stage, Ogier won the stage again, widening the gap between the two to 1.7 seconds. Coming to the final Power Stage (extra points stage), Neuville defeated Ogier again, the stage time was 2.7 seconds faster than Ogier, the total score was 1 second ahead of Ogier, and he was second in the game. Jill can only be placed in third place.

Leading Sordo did not perform very well today, but due to a lot of lead, although he lost a little time in each stage, it did not affect his overall ranking. In the end, he won the championship with a 5.1 second lead. This is Sordo's victory in Sardinia in 2019, after winning the championship in Sardinia, this is the third championship of his WRC career. Congratulations Soldo! It is worth mentioning that the Hyundai team surpassed the Toyota team in the team points and occupied the top position with the excellent performance of the two drivers in this field.

The seventh leg of the World Rally Championship will be held in Belgium from November 19th to 22nd.